How to Deal with a Picky Eater 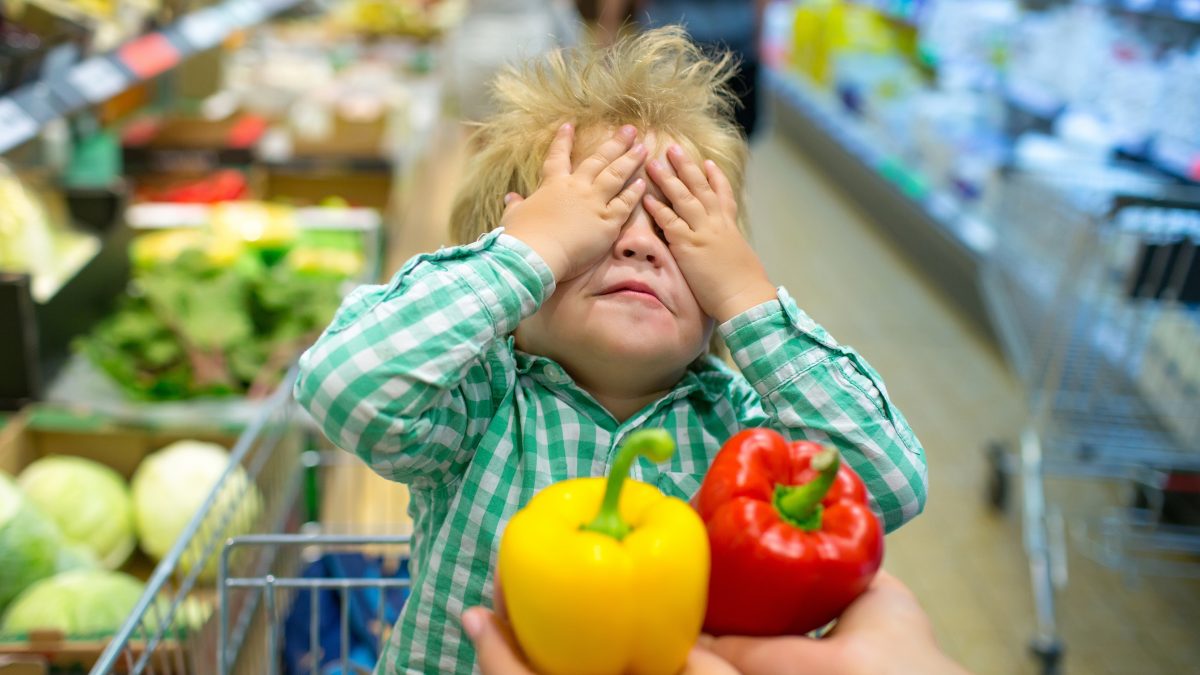 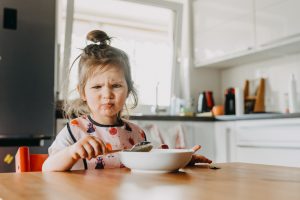 I know this isn’t a sleep-related post, but I get so many parents asking me about this topic, I thought it might be nice to take a little break from writing about sleep and address another parental hot-button issue.

So if you have a toddler in the house, you’re probably already familiar with this scenario. You make a nice, healthy breakfast for your little one, they sit down in front of it and make a face, tell you they’re not hungry, (or at least not hungry for the food you’ve prepared for them,) then some gentle encouragement on your side meets more refusal on theirs, both of you start to get a little frustrated, one of you ends up in tears, and eventually you break down and offer them whatever they’re willing to eat, since it’s better than them not eating at all. Or maybe you stick to your guns and refuse to offer up their preferred breakfast food in the hopes that they’ll get hungry enough to eventually give in. Twenty minutes later, they’re begging for a glass of milk and some Goldfish crackers, and the battle continues until your toddler’s melting down and you’re at the end of your rope…

This is such a tricky situation because we’re stuck between two bad options, right? You don’t want your child to go hungry but you also don’t want to keep giving in and letting them only eat foods that have no nutritional value. I know Cheerios aren’t exactly unhealthy, but they don’t offer everything a child needs from their diet either. Not by a longshot. We’re desperate to get some variety in their diet, but every time they see anything with some color, they immediately shy away from it. This is one of those parenting conundrums that sounds amusing if you don’t have kids, but it’s actually a serious issue. Too much pressure on a toddler to eat this and not eat that can actually set up a resentment towards mealtimes and a bad relationship with food in general that can last well past their toddler years. So what’s the solution here?

Well, I’m neither a nutritionist or a child psychologist, but I can tell you what’s worked for me and a whole lot of the families I’ve worked with.

1. Know Your Role
As parents, we tend to see ourselves as the authority figure in the family, but let’s be real for a minute, because when it comes to eating, our ability to enforce the law is limited. We can’t actually force our kids to eat anything they don’t want to, so in the end, they’re the ones with the power here. Your role as the parent isn’t to decide how much of what food your child will eat. You are in charge of purchasing food, preparing meals, and scheduling times for them to eat. What
they eat and how much of it is something you should leave up to your child.

2. Schedule Meal and Snack Times
Toddlers are in that strange growth phase where they’re high-output machines with small fuel tanks, by which I mean they have the energy levels of the Tasmanian Devil, but their tummies are still too small to hold enough food to keep them feeling full for long. So I like to offer a meal or a snack every two hours. When they get up, prepare them some breakfast, then two hours after they’re done, offer them a snack. Two hours later, it’s likely time for lunch, another snack at after nap and then dinner at 5-5:30. This isn’t a rigid schedule. We’re more concerned with the length of time between meals than we are with what time of the day they’re eating. Where we are going to be fairly diligent though, is in not offering snacks in between those two hours. Especially not those easy goto snacks like Goldfish crackers or Cheerios. If your kids know they just need to wait you out until after breakfast to get their favorite treats, they’ll do it. The willpower of a toddler is a powerful force indeed. 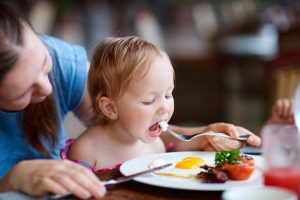 3. Offer Choices
For each meal and snack, I suggest you offer no less than three choices. Hold on! Just hear me out. I’m not suggesting you cook three separate meals every two hours. These choices can be small and simple, just as long as they’re reasonably healthy and have some variety to them. At breakfast, you might put out some peanut butter toast, some sliced banana, and some cheese. Let your little one know that those are the options and they can eat as much or as little as they want of whatever’s in front of them. If you’re making pasta for dinner, put together a quick salad and a side dish of some sort. It doesn’t have to be fancy. Steam some broccoli or green beans, toss them with a bit of butter, and place
them on the table. We don’t need to create a culinary masterpiece every night, just as long as you’re presenting your child with some options.

4. Let Your Child Take it From There
Now that you’ve set up a schedule and provided your little one with some options, the rest is up to them. If they decide to eat all of their pasta and none of the veggies, you’ve going to be cool with it. If they eat all of the salad and only one bite of anything else, you’re going to be cool with that too. If they want to put their mashed potatoes on top of their broccoli and eat it with chopsticks, that’s their prerogative. Giving them control over what they eat is going to take a
huge amount of stress off of everyone at the table, and it creates a much more positive association with mealtimes and food in general.

5. Be Repetitive
Toddlers have the uncanny ability to make judgments on foods before they’ve even put them in their mouths. Sometimes, they can tell if they like something just by the sound of the word, right? “Asparagus? You mean that vegetable I’ve never tasted, never smelled, never laid eyes on, and never even heard of prior to this very moment? Don’t like it.” Toddlers rarely take to a new food until they’ve gotten familiar with it, first through their eyes, then through smell. It’s not until they’ve developed a level of comfort with it being in front of them that they’re likely to give it a taste, so don’t give up on anything until you’ve presented it at the table at least five times or so. Even if your toddler seems repulsed by it at first, it may just take a little acclimatization until they’re willing to take it for a spin.

6. Set an Example
If you’re not serious about food, chances are your toddler won’t be either. I’m not just talking about nutrition here, but about the whole relationship your family has with the preparation and enjoyment of food. If you take the time and make the effort to cook healthy, delicious meals, and make it a priority to enjoy time together, as a family, at the table, that positive vibe is going to shine all over everything food-related in your home. If you treat food as little more than fuel, stopping to gas up in between the “important” parts of life, they’re going to pick up on that as well. I’m not saying that a trip to the Chik-Fil-A drive through shouldn’t ever be in the calendar. There’s absolutely room for quick and easy meals, but they should be a treat, not something you do because preparing family meals is a headache. 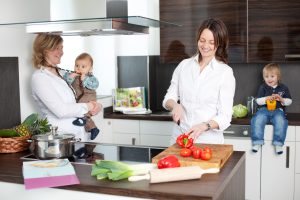 7. Avoid Negative Labels
I think this is something that we as adults need to embrace as well. We tend to look at foods as “good” or “bad” foods, and which category they fall into is determined almost entirely by their current status. But most dietitians will tell you that most foods can be reasonably healthy, or at least not harmful, if eaten in moderation. Likewise, any food can be unhealthy if you don’t eat anything else. These all-kale diets and their ilk may help you lose a few pounds, but they’re not providing anyone with adequate nutrition, no matter what Gwenyth might tell you. But more than that, if your kids see you refusing to eat certain foods because they “make you fat” or “aren’t good for you,” they’re likely to associate negative feelings towards food as a whole, and shy away from trying anything unfamiliar. So the important takeaways here, in case you didn’t have time to read the whole thing, are to set and adhere to a schedule, be patient while your little one’s getting accustomed to the unfamiliar, be predictable and repetitive, lead by example, and create positive associations instead of negative ones. All of which is advice I give my clients about their babies’ sleep on pretty much a daily basis, so really, who says we’re drifting out of our lane here? The same rules apply, whether it’s eating or sleeping. And in both scenarios, it’s our little ones who have the ultimate authority, so it’s easier and more effective to lead them where we want them to go,rather than forcing them.

And now that that’s done, where did I stash those Peanut Butter Cups bars?